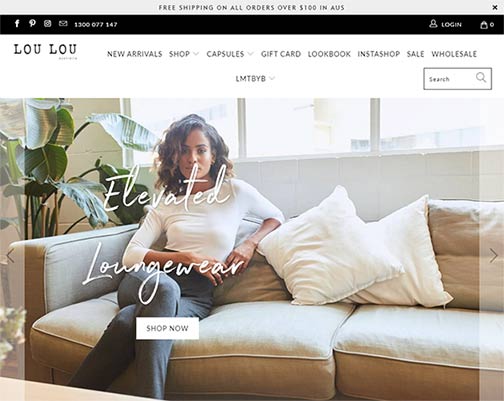 The result: ecommerce transactions up more than 170% and revenue from the Shopify website almost tripling across the bamboo clothing store’s first 90 days as a client of the Sunshine Coast digital marketing agency, from early April 2020 onwards, compared to the preceding 90-day period.

While Jodi continued to work hard on her business, despite the challenge of also suddenly home-schooling her young children, by partnering with Kook the SEO wins for Lou Lou Australia over this period were particularly notable:

Is this all due to more people being at home on devices?

Lou Lou Australia’s search visibility relating to keywords identified as highest priority for optimisation, through in-depth research at the commencement of the SEO program, increased 103.2% across May and June 2020.

The number of these priority keywords ranking in the top 10 on Google searches nationally increased 300% from one to four during the same timeframe.

Both of the above metrics indicate that Lou Lou Australia made ground on competitors, which contributed significantly to its massive revenue boost from organic search.

While overall growth in ecommerce transactions within Australia was more than 80% year-on-year in the eight weeks after the World Health Organisation’s declaration of the COVID-19 pandemic on March 11, 2020, according to Australia Post’s Inside Australian Online Shopping 2020 eCommerce Industry Report, Lou Lou Australia’s performance was far superior.

With Kook engaged midway through that timeframe, Lou Lou Australia’s ecommerce transactions were an incredible 725% higher than the corresponding period in 2019 and 87.1% higher than the preceding eight weeks leading up to the pandemic declaration.

There were decent increases in transactions across the board, including:

Performance gains across the first 90 days of Kook management

Yet the biggest growth was experienced from April 8 onwards, when the first optimisations were made under Kook’s SEO program.

With the organic search spikes outlined above and Kook-managed Google Ads campaigns and Facebook Ads campaigns also activated in the second half of the same month, Lou Lou Australia’s growth in the 90-day period from April 8 to July 6 was significant.

Compared to the preceding 90 days stretching back to early January 2020, tracking in Google Analytics for the website overall – regardless of traffic source – showed:

Taking into account both the paid advertising campaign with placements across Facebook and Instagram which delivered a return on ad spend (ROAS) about 26 times higher than previously, as well as sessions originating organically as a result of the client’s in-house posts, social traffic grew 151.5%, with transactions and revenue up 283% and 246.9% respectively.

Even as Queensland and most of Australia started to return to normal, with COVID-19 restrictions on trade and travel easing, the upward trend has continued.

During Stage 2 of Queensland’s easing of restrictions, from June 1 to July 2, organic search delivered 55.3% more sessions, 15.3% more transactions and 21.1% more revenue that the preceding 32-day period.

What has resulted in the biggest SEO wins?

In addition to strategic keywording, through these first few months of Kook SEO management big jumps in organic traffic followed:

Placing your trust in the digital marketing experts at Kook to enhance your business’s online presence is a smart investment. The internet is our world. Being local is our strength. If you want the most experienced and dedicated web firm on the Sunshine Coast in your corner, then let’s talk.